Background - How the Project Started

I am a freelance editorial photographer based in Southampton. In my spare time I am working with the "We Do It In Public" team on a informal, long-term documentary project to build an archive of photographs of breastfeeding taking place in everyday situations, but most particularly in public places.

The majority of photos of breastfeeding in newspapers and magazines generally fall into two categories – highly sentimentalised close-ups of mother-and-child, or photos taken in poverty stricken situations in the developing world. We would like to document the much wider realities of breastfeeding - women feeding whilst going about their daily lives among family and friends, negotiating the day to day practicalities of running a household, going out to work etc. The hope is that if more women see how and where other mothers manage to breastfeed, they too will be encouraged to give their baby its best start in life and breastfeed too.

The project started almost by accident whilst I was on a job at Waterside Children's Centre in Hythe, Hampshire in February 2011. I was carefully avoiding getting a young mother breastfeeding in a mums' and toddlers' group into shot, but she kindly volunteered that she wouldn't mind being in the photos. We got into conversation and she (Lucy) explained that the Bosom Pals breastfeeding support group she was part of were looking for a photographer to help with their contribution to Breastfeeding Awareness Week. She introduced me to Jayne Threlfall, midwife coordinator of Bosom Pals for the New Forest area and International Board Certified Lactation Consultant (IBCLC). Our collaboration has gone from strength to strength since that meeting, and now includes midwifery support workers (Katherine and Sian), peer supporters, children's' centre staff and of course the mothers. Three of the mums - Lucie Mann, Emma Rundle and Lisa Watts - have got very involved and have been using their marketing and activist skills to recruit more volunteers and start spreading the word about what we are doing. All these people together are "We Do It In Public".

A second network of volunteers has opened up around Southampton through a young friend of mine Sarah Webb. She runs a baby yoga class, Little Oms, and has recruited a steady stream of friends and colleagues who want to help with the project. Recently an old friend in London, a midwifery lecturer, has started to see if we can extend the network there too.

After my initial meeting with Jayne we kicked things off by taking photos at Bosom Pals meetings in Waterside and Romsey and at the homes of some of the participants. Jayne then started to organise "outings", such as the one to the cafe at Lepe beach, which extended the range of photos. As word has got round, the list of mother's wanting to be photographed has grown steadily.

We want to capture breastfeeding taking place in as many different public and home situations as we can. We have discovered that a lot of the best images are those which do not focus on the mother and baby feeding. The story is sometimes better told by showing the feeding quietly going on in the background whilst life goes on around them. But that does not mean we don't take photos of just mum and baby enjoying the feed. Many volunteers want to have these types of photos too, aware that these are, in the overall history of families, fleeting moments that they would like to have a record of.

The first use of the photos is for displays and websites created by Bosom Pals - eg. the display created as a contribution to National Breastfeeding Awareness Week. Key images from the archive are, however, also available for wider use by relevant magazines and breastfeeding educational and promotional organisations through our online picture library.

I am working on this project partly as a tribute to my wife Henrietta Branford who died from breast cancer in 1999. She was fearless about breastfeeding in public. She discretely breastfed our three children anywhere and everywhere - during theatre performances, on trains, on the beach . . . Our whole family were thrown out of the Tate Gallery in London in the late 70's because she was breastfeeding quietly behind Rodin's sculpture "The Kiss". She taught me how crucial it is generation after generation to remind everyone of the importance of breastfeeding, and hopefully We Do It In Public is doing just that. 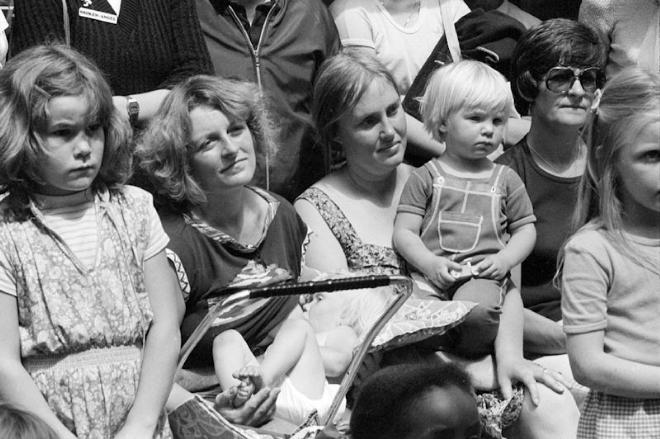 Here is Henrietta feeding our youngest, aged 15 months, at the Winchester Hat Fair in 1982.